It was decided that the general plan and purpose of the organization should be to investigate and study the history of the county of Delaware and the state of New York, to provide for the collection and preservation or display of papers, books, records, and other things of historical interest: to hold, own, operate or manage property, real or personal, necessary or advisable for the purpose herein expressed and to provide for the marking and preservation of historic sites and buildings, and in general carry on all activities appropriate to a historical society.
- From DCHA minutes October 6, 1945 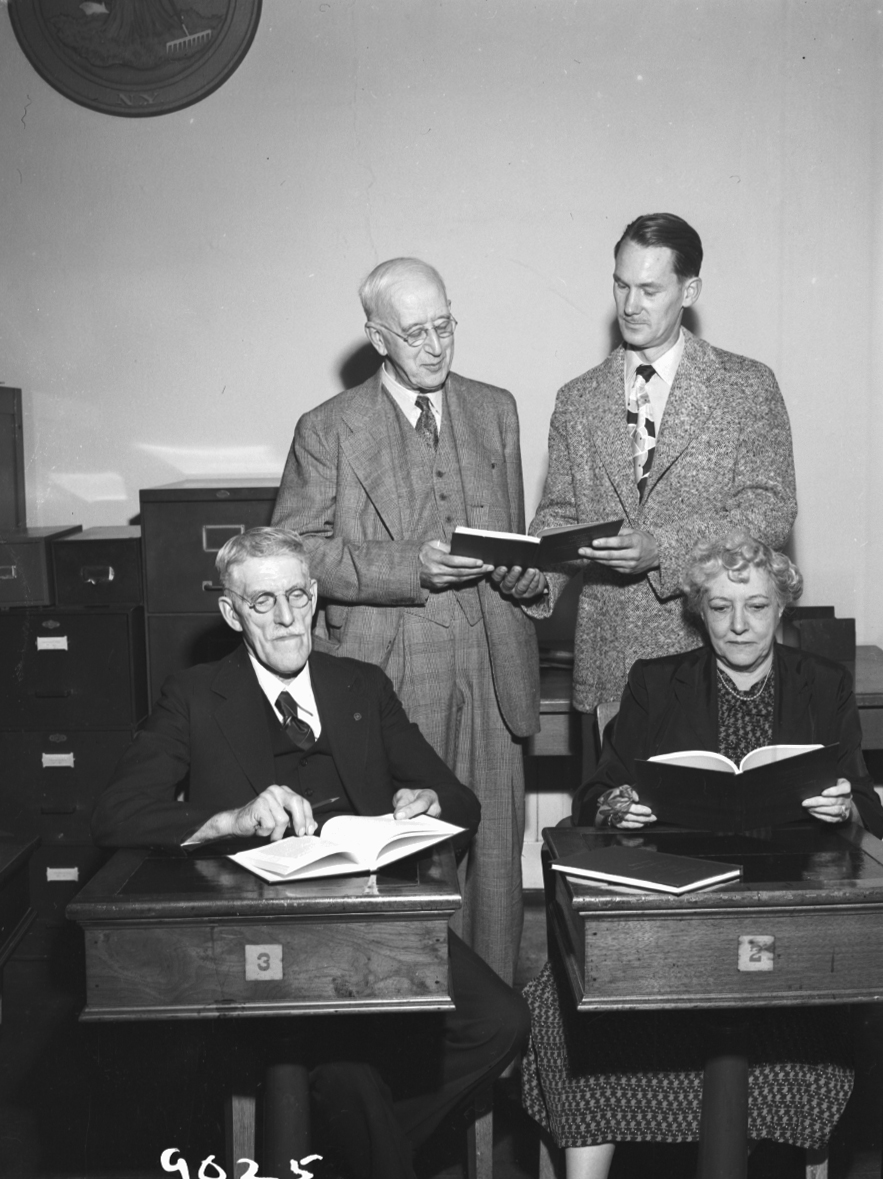 From 1945 to 1954 the association met twice a year, in June and October. These meetings were held in different towns around Delaware County in schools, libraries, grange halls and legion halls with a different presenter on a historic topic. Elizabeth MacDonald of Meredith was the first presenter at the organizational meeting in August 1945. 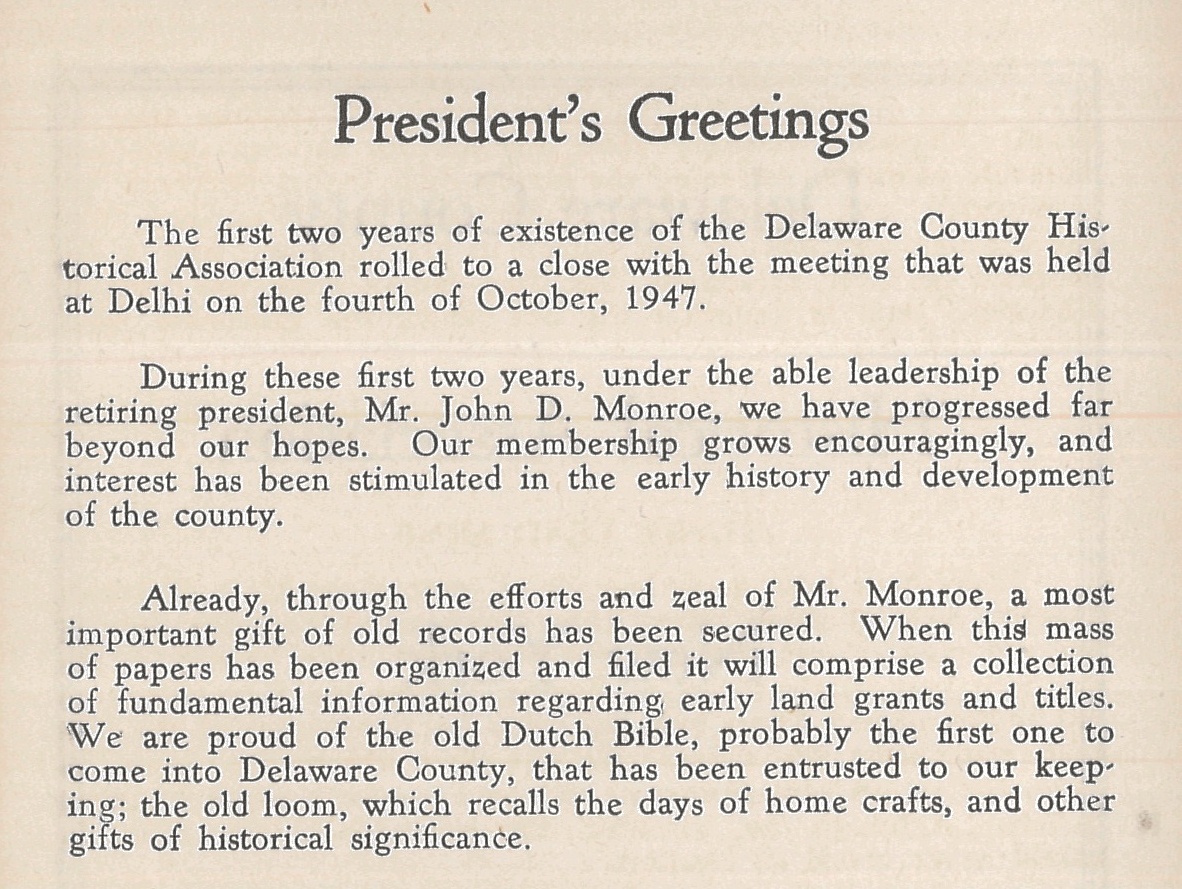 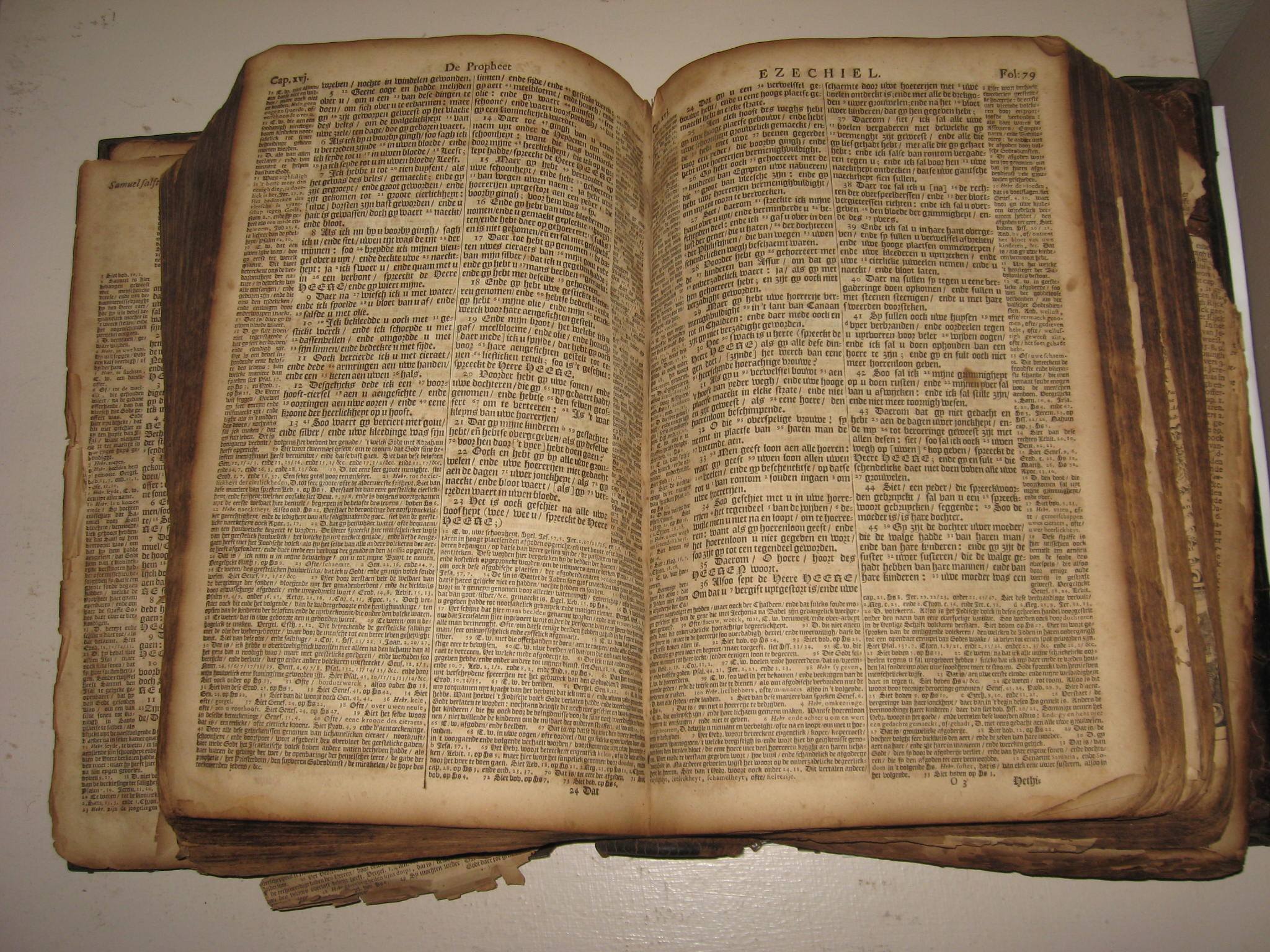 
DCHA had only been formed a few years when we were gifted an old Dutch bible. This is one of the earliest and oldest donations DCHA has received. The bible belonged to Harmonus Dumond one of the first settlers of Middletown. Donated by Mrs. Katherine Keener, DCHA Archives


My first visit to the library/archives came, amazingly, on Christmas Eve 1981. I was living in Arlington, Virginia by then and was visiting my folks. The recording in my journal of this first research visit was brief, just noting the visit between Christmas shopping and visiting my aunt. I made a return visit the following year on September 27. I talk more about the visit in my journal, noting I saw the Dumond Bible.
- Ray LaFever (DCHA Archivist), July 8, 2020


DCHA was granted a provisional charter on October 24, 1958 by the Board of Regents of the State of New York as a non-profit Educational and Historical Association. (pictured below right) Assemblyman Edwyn E. Mason of Hobart was instrumental in helping DCHA get its permanent charter. He presented DCHA's president, Mrs. Tracy Matthews, with the charter in front of the Frisbee House on Saturday September 9, 1967. There were 83 people in attendance. (pictured below left) 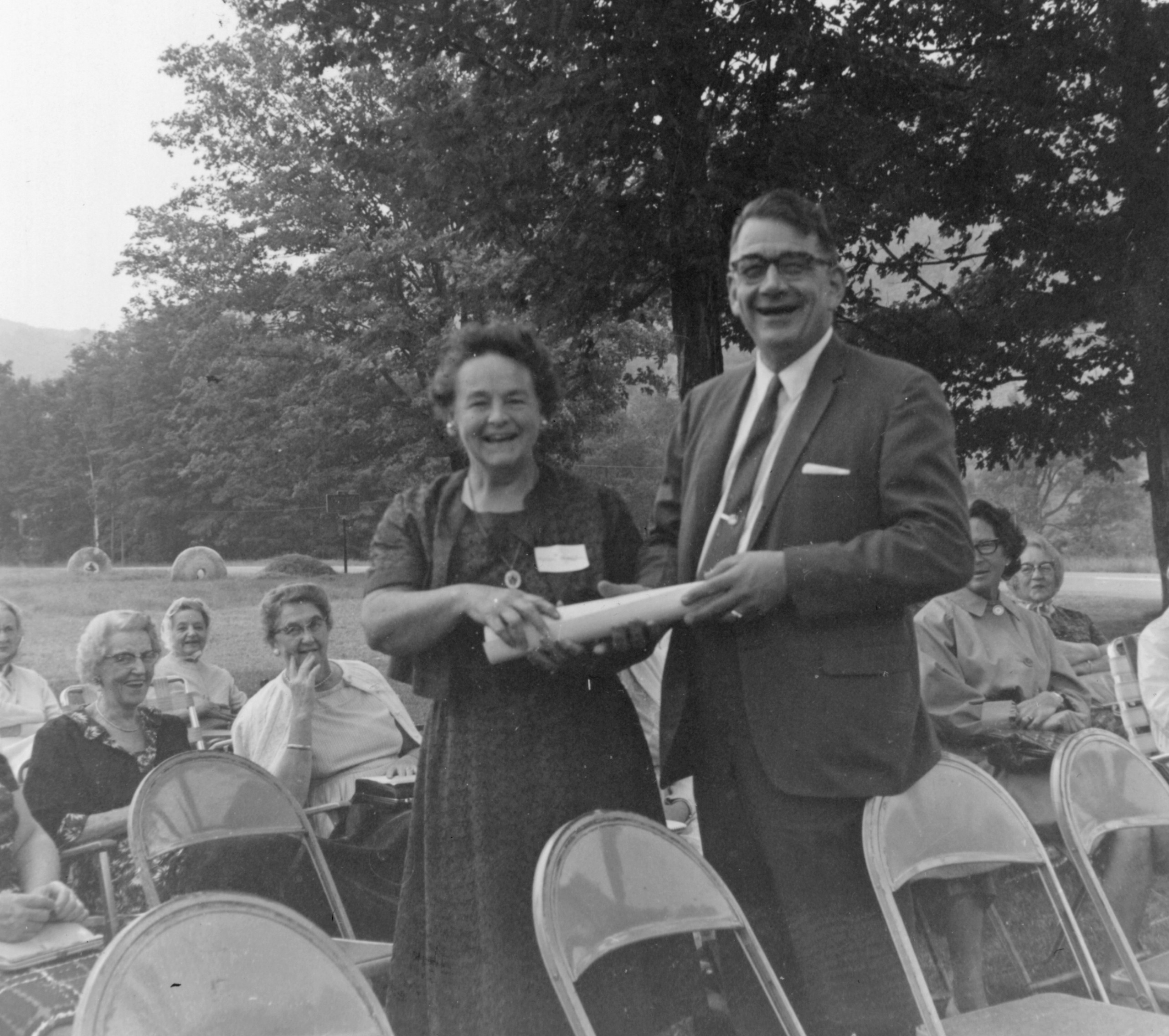 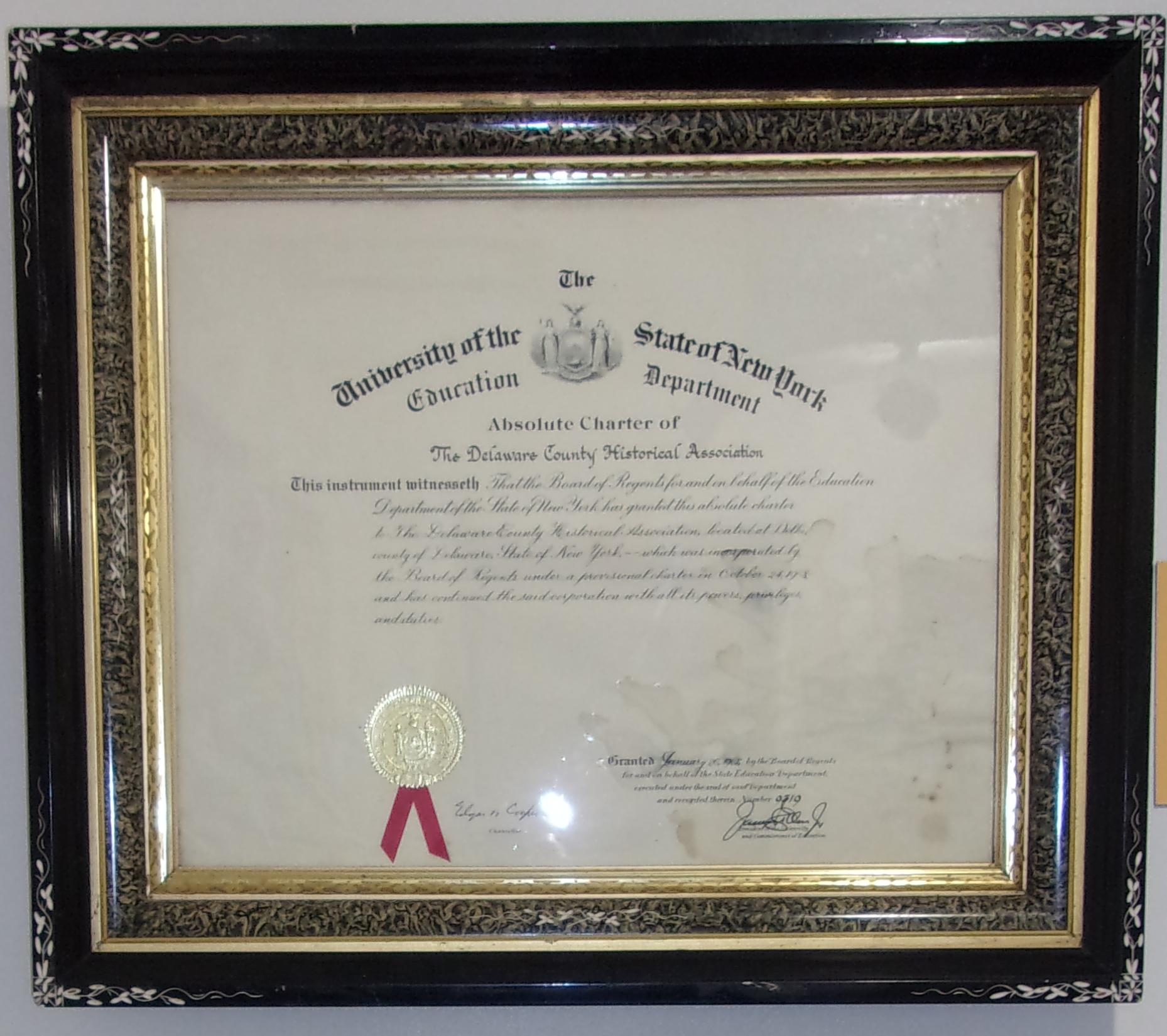 Also there is so much I could relate about the early days. Buying the Frisbee place, obtaining the charter, etc. A number of people were of great help, doubtful if we could ever have succeeded without them. Jennie Frisbee, Harry Eckert, Jennie Chambers, Marion Matthews and others.
- Edwyn E. Mason (Board member & Volunteer), November 1989 (from letter)


DCHA began receiving donations of historic items shortly after the organization was formed and before they had a building to call home. The Frisbee house was first mentioned as a potential building in June 1948. Jennie Chambers, president of DCHA from 1954 to 1962 was instrumental in acquiring the Frisbee House. She worked closely with Edwyn Mason to achieve this. DCHA bought the Frisbee House/Farm for $6,500 on August 27, 1960 and took title of the property on September 7, 1960. Included in this 60 acre site was the timber-framed barn and Frisbee Family cemetery. Unfortunatly, Ms. Chambers died in a car accident before she could see the house fully restored. 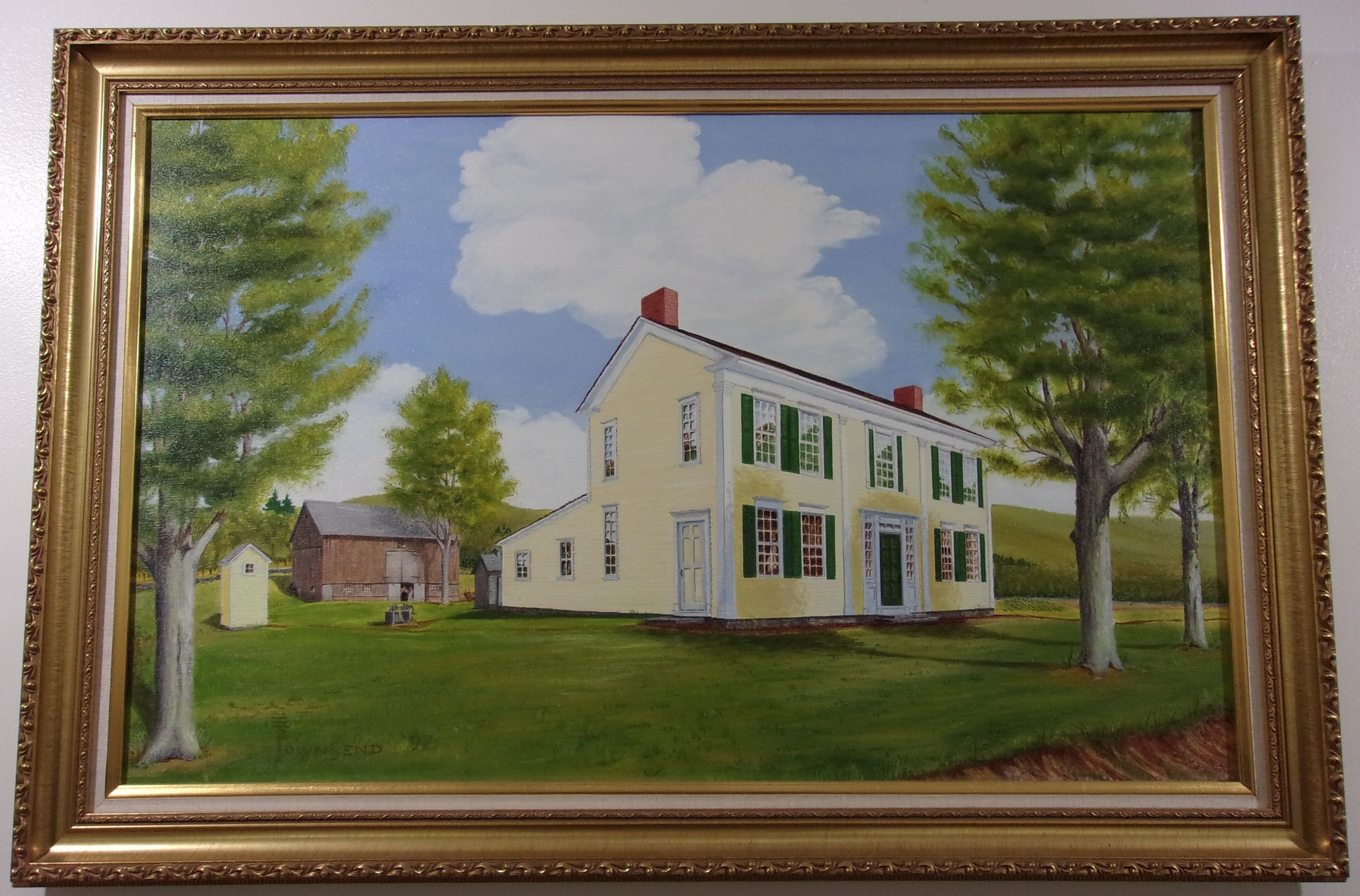 Painting of Frisbee House, 1997
Artist: Burdette "Burt" Townsend (1919 - 1997)
This painting was turned into a commemorative postcard for the Delaware County Bicentennial in 1997.
Donated by Barry Townsend, 20160002


The first tour of the house was for the Delhi Village Improvement Society on May 11, 1966. Following a luncheon at Riverdale, East Delhi about 50 ladies toured the house. DCHA volunteers dressed in appropriate costumes and acted as guides and hostesses. 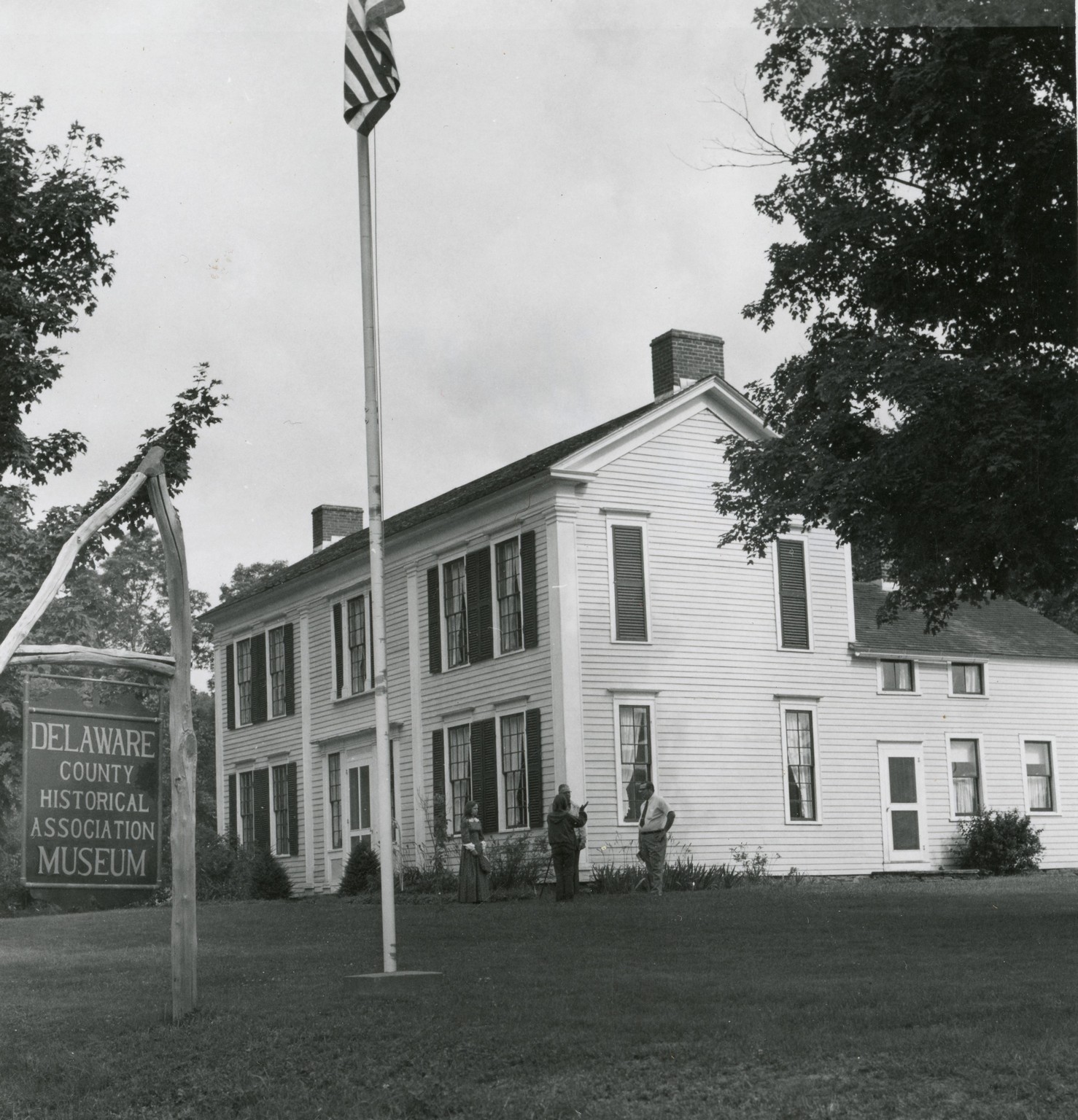 The Frisbee House was featured in the Delhi Village Improvement Society's Historic Homes Tour on Saturday July 26, 1969. (Brochure pictured below) 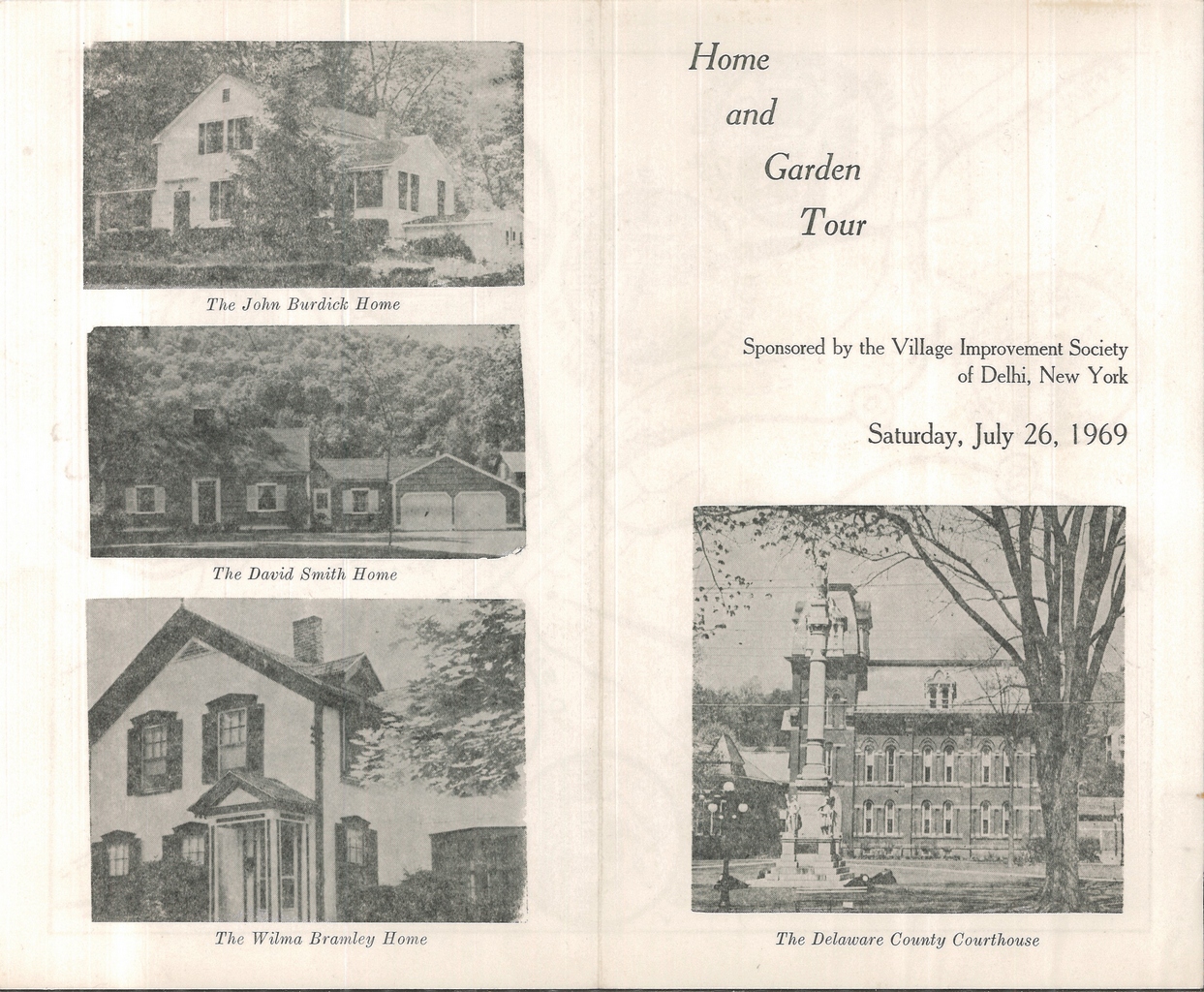 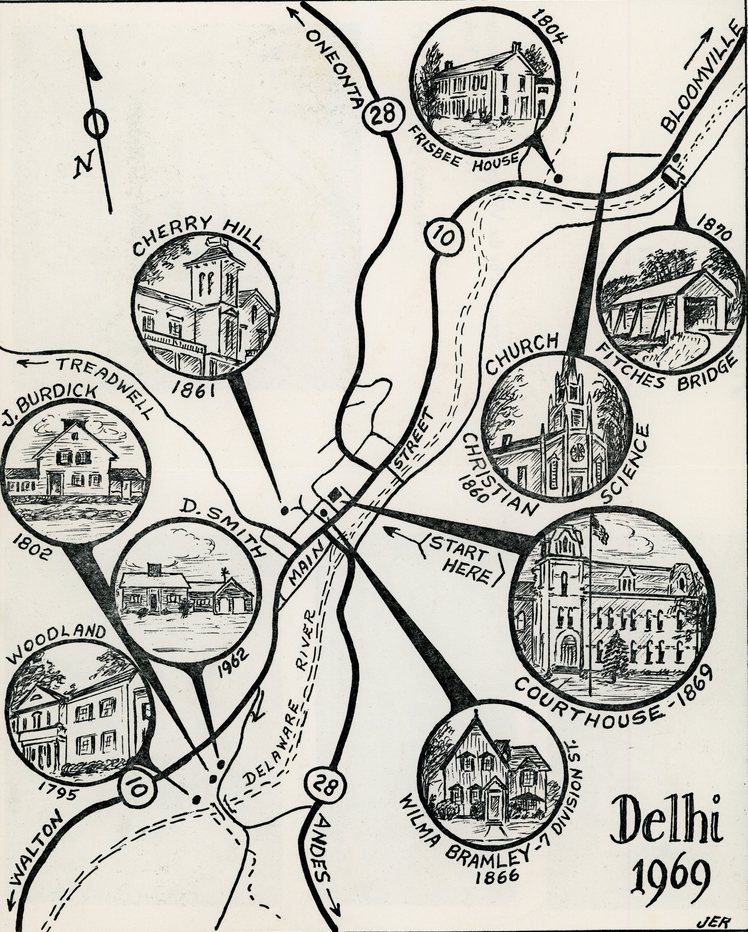 It was a beautiful day and we had at least 325 visitors at the museum. Mr. Ralph Taber of Davenport, served as a guide at the Toll-gate and he had at least a hundred visitors. The following acted as guides in the museum: Mrs. Frank B. Lane, Mrs. Tracy Matthews, Mrs. Earl Knapp, Mrs. L.P. Mauer, Mrs. Henry L. Hovemeyer, Sr., Mrs. William Schultz, Miss Susan Hoag and Miss Caroline E. Stoddart. The following were from the Delhi VIS and they were in costume, Mrs. James M. Johnson, Cathy Johnson, Linda Houck, and Jane Stewart. The floral arrangements throughout the house were done by the Delaware County Horticultural Society.
- DCHA minutes, August 9, 1969


The Frisbee House has continued to be the main showpiece of DCHA. In 1980 the first dinner in the Frisbee House was held as a fundraiser. The fifth year the event was held DCHA published a cookbook of menus and recipes used over the years. These dinners have been replaced since 2000 by the Enchanted Evening at the Frisbee house.

An archives building committee was formed in October of 1972. DCHA broke ground in the fall of 1975 and completed the first phase of the building in 1976. The second phase of building was completed in 1977 with the addition of a large exhibit space. 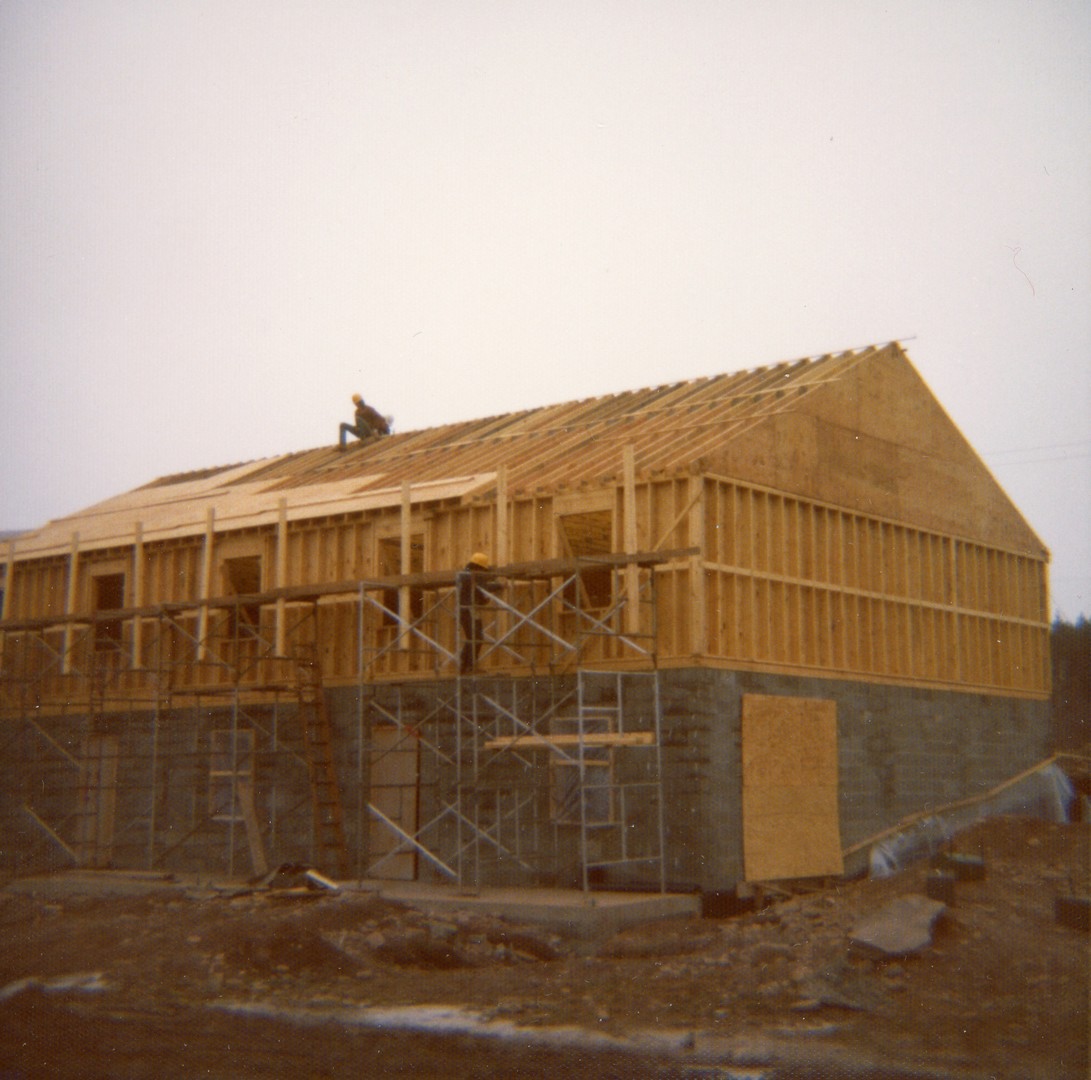 The library was dedicated to H. Fletcher Davidson on October 1, 1977. Officers of the county association building committee who worked on the project included: Merle Houck, chairman; H. Fletcher Davidson, county historian; Tracy Matthews, David Smith, George Kenney, Frank and Helen Lane, Ward Herrmann and Werden Goodemoot. Architect Julius "Joe" Fredericks of the Delhi Tech Ag school designed the building and C.R. Jones, conservator of the Cooperstown historical museum was an advisor. John Raitt of Delhi was the president of DCHA at the time. 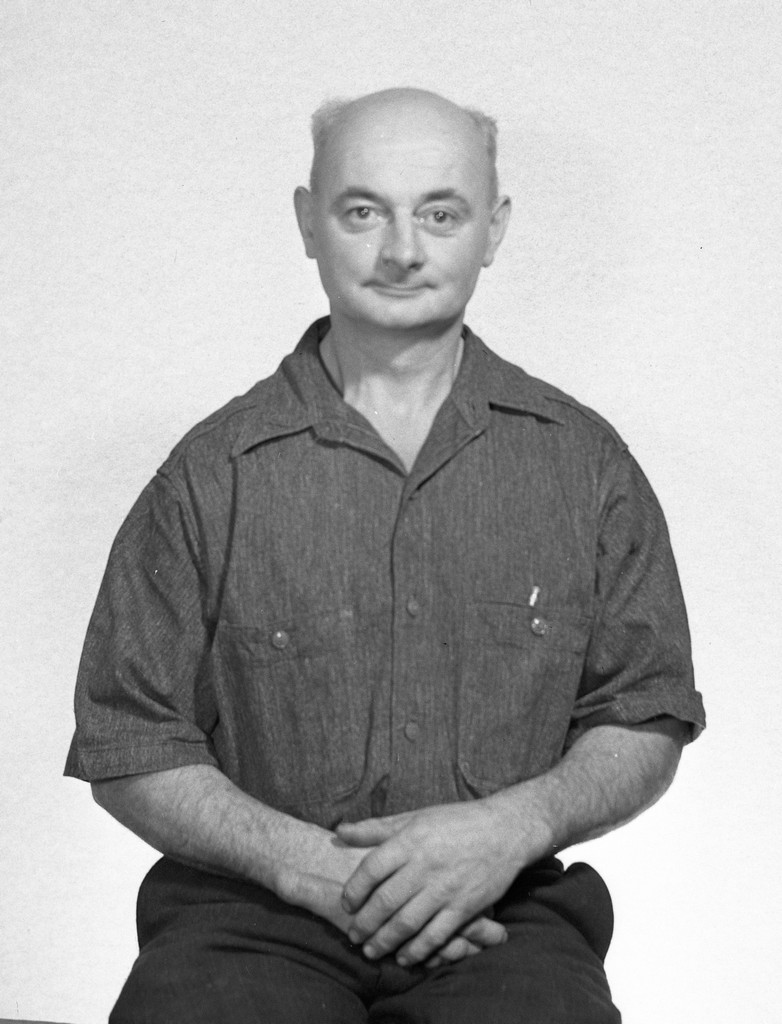 
Howard Fletcher Davidson (1895 - 1987) served as the Delaware County Historian from 1960 to 1981. DCHA named the library archives in honor of H. Fletcher Davidson in 1977. Frank Lane of Walton described Mr. Davidson as "an idealist, visionary and dreamer." Born in Bovina Center, he graduated from Delaware Academy and served in the Marine Corps during WWI. 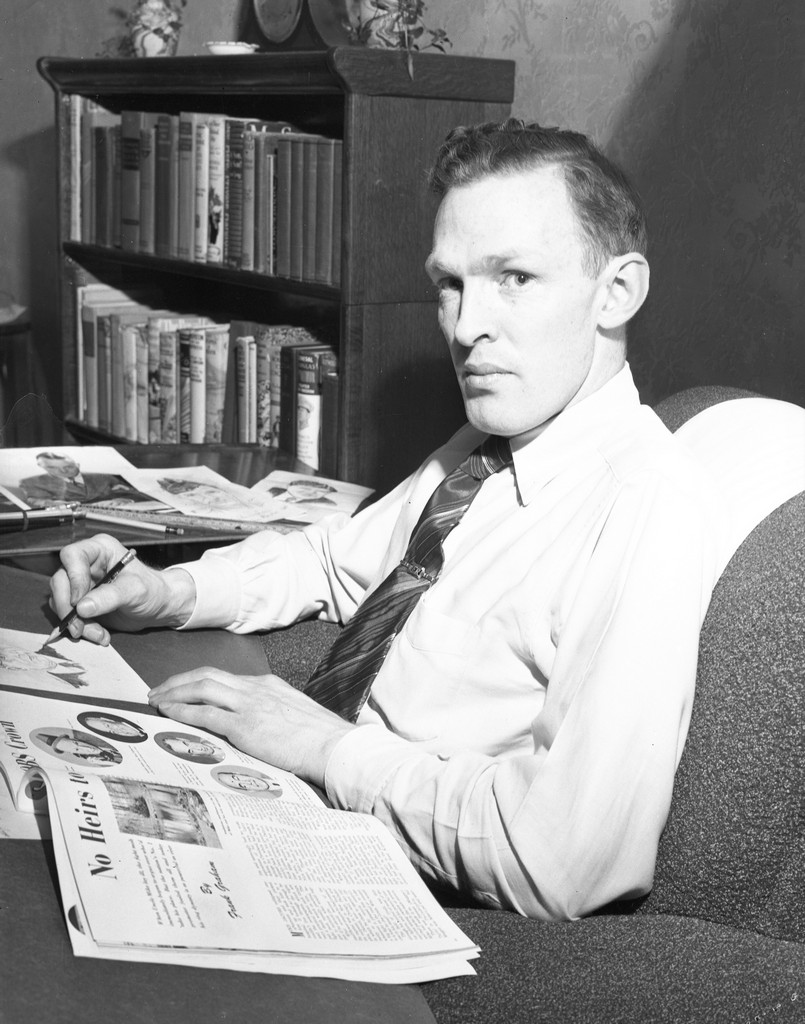 
John Raitt (1912 - 2004) served as DCHA's president from 1973 to 1976 during which time he was integral in helping to build the administration building. Later he also volunteered in the library. He became the Delaware County historian in 1981 when H. Fletcher Davidson retired and served in that capacity until 1995. He was also the Delhi village historian for some time and was an accomplished artist. John was also a veteran of WWII and worked for the United States Post office, before and after the war. 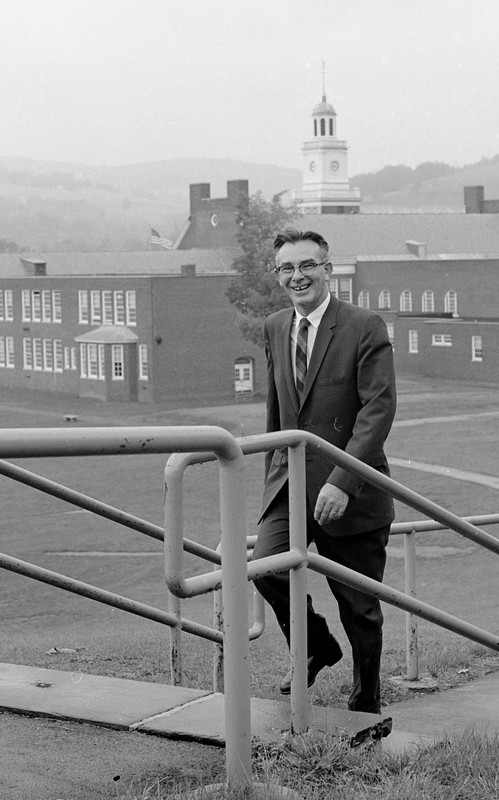 
Merle Houck (1917 - 1985) was the president of DCHA from 1980 - 1982. He was the chairman of the building committee for the administration/archives building. He was a teacher and WWII veteran. He taught in rural schools in Gregory Hollow and Walton then at Delaware Academy where he became the elementary principal. He married Shirley A. Schneider in 1946.

The Merle Houck Nature Trail was created by Will Frisbee and the Kiwanis Club in the summer of 1985 - 86 as a memorial for Merle Houck. This trail starts just beyond the Frisbee House and runs alongside picturesque Elk Creek.

Our other historic buildings were moved to the site from around Delaware County:
(see map below) 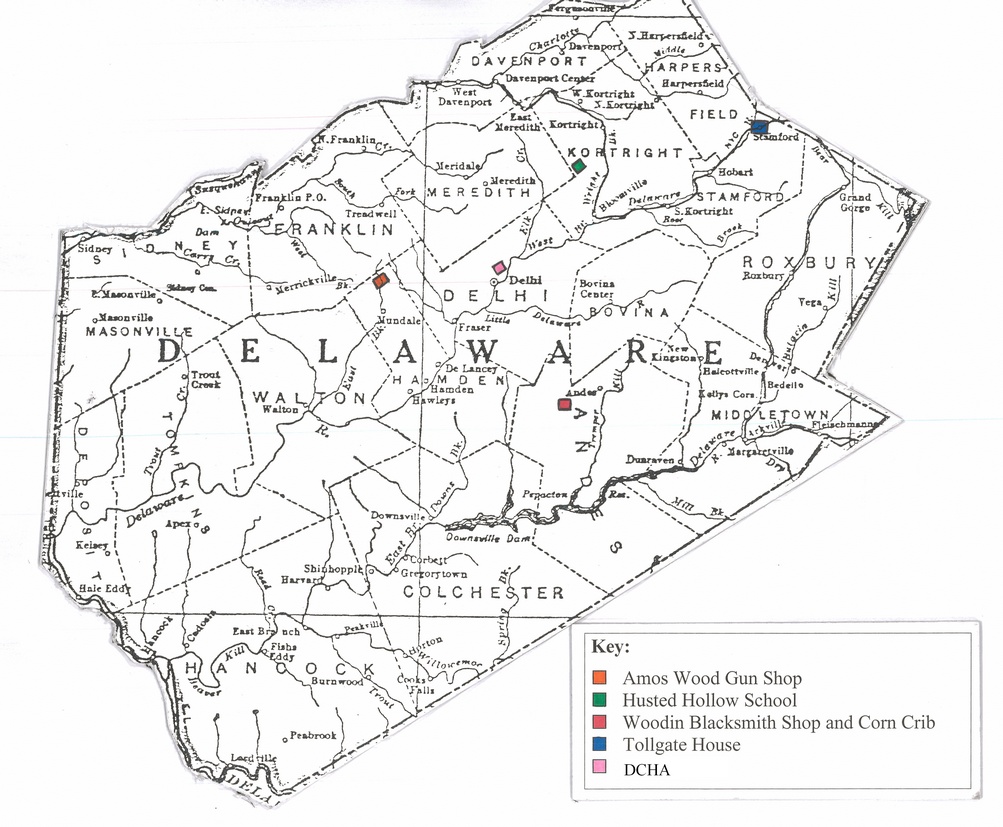 The Amos Wood gun shop from Hamden was the first of these buildings to arrive on November 7, 1966. The tollgate house from Stamford was moved in July of 1968, and the Husted Hollow schoolhouse from the town of Kortright came in 1969. The last building to be moved to the DCHA site was the Woodin blacksmith shop and corn crib from Andes on June 11, 1993.

Amos Wood's Gun Shop appears much as it did from 1885 to 1890. Amos Wood (1841 - 1924) was a gunsmith, postmaster, farmer and inventor. He used this building in North Hamden from 1867 to 1924 as both a gun shop and post office. DCHA bought the gun shop from Amos Wood's grand-daughter, Mrs. Ralph Irwin for $900. The contract was signed on October 24, 1966. A dedication for the gunshop was held on July 22, 1972. Werden Goodemoot coordinated the final restoration of the gunshop and planned the dedication. 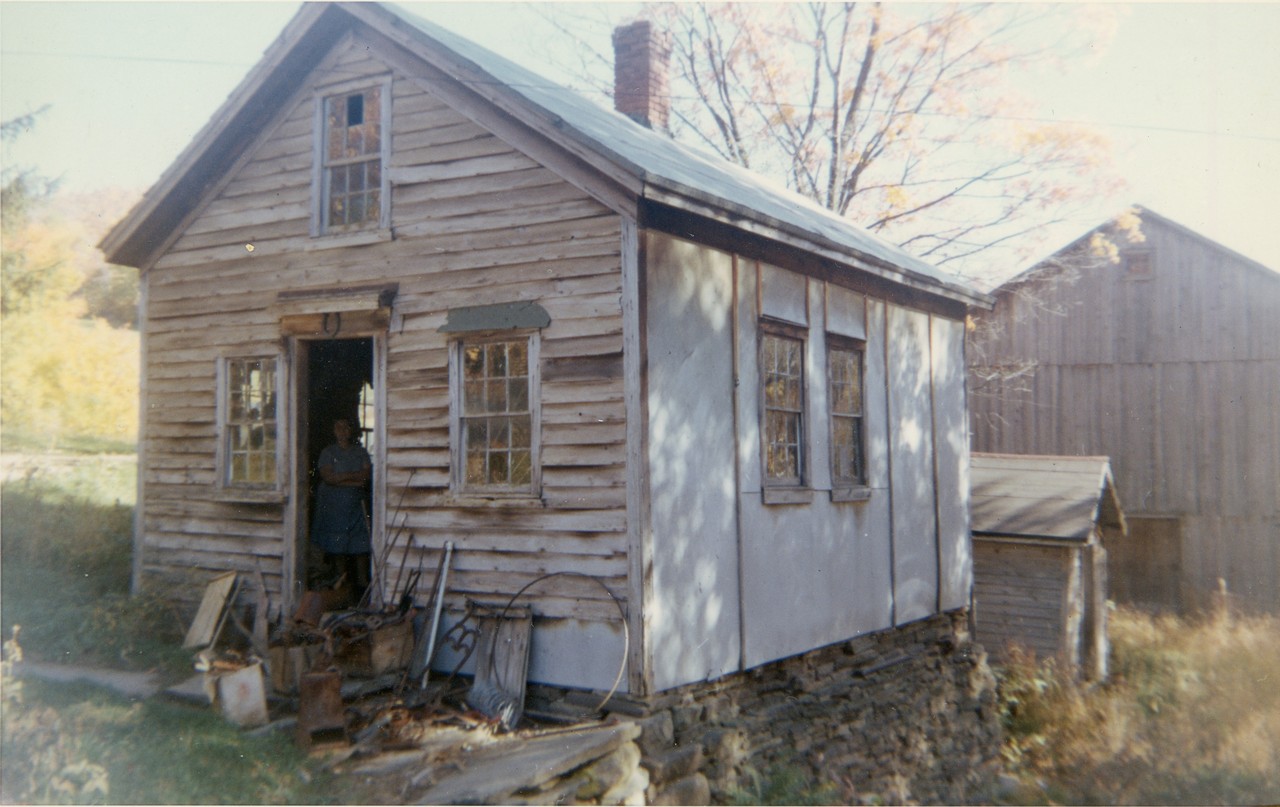 Gunshop on its original site in Hamden. 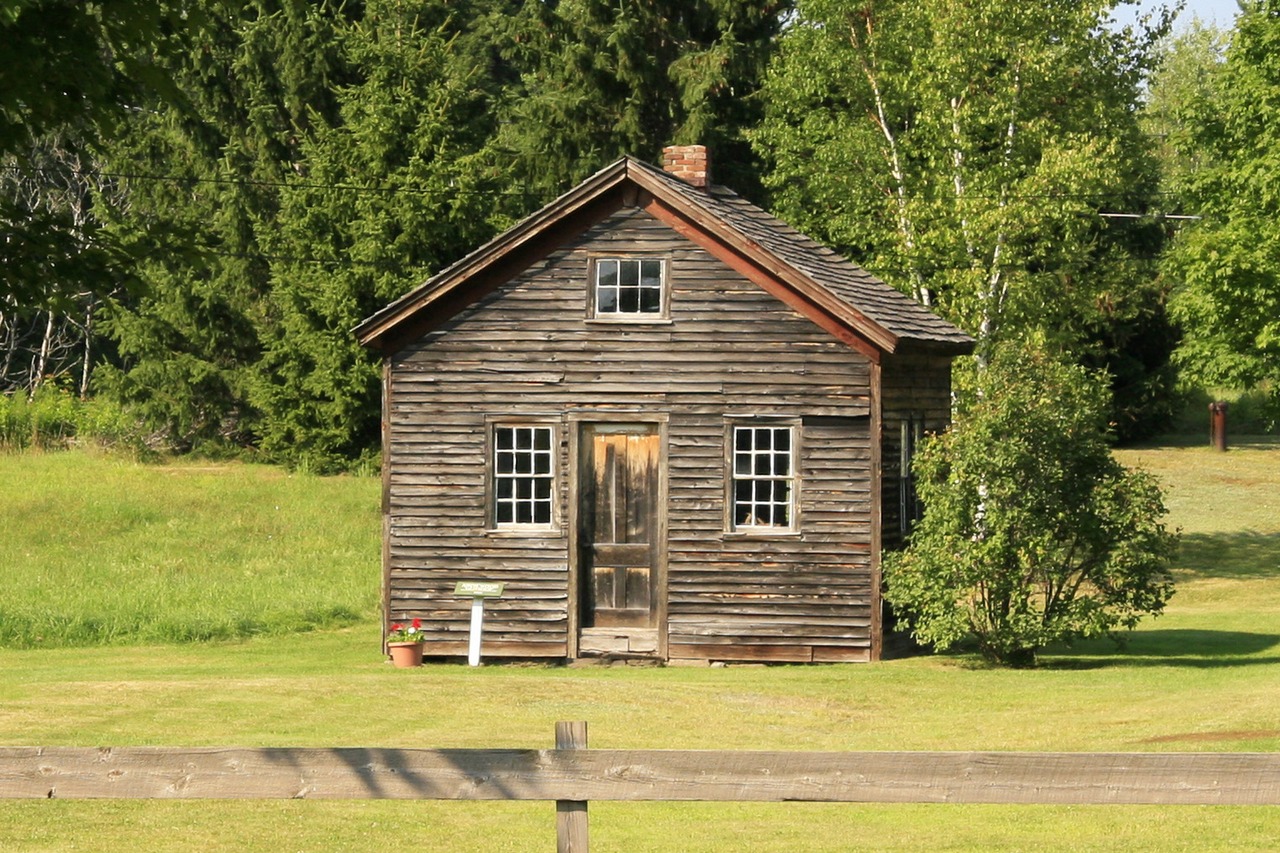 
This Tollgate House once stood on the Catskill/ Susquehanna Turnpike in the Town of Stamford. The house was donated to the Delaware County Historical Association by Fred Murphy and moved to DCHA's site on July 12, 1968. It was originally used as a caretaker's house. The first caretaker arrived November 1, 1969.


The President reported that we are to have a Caretaker at the museum. He is Mr. Elwood Frisbee. Mr. Frisbee is married and has a 17 year old son. The son has short hair and wears ordinary clothes. The Frisbee's are planning to move here November 1, 1969. They will live in the Toll-gate house.
- DCHA minutes - September 13, 1969

By the summer of 1986 the tollgate had been remodeled to be used as a visitor orientation center and gift shop. Currently it houses an exhibit on the Susquehanna Turnpike. 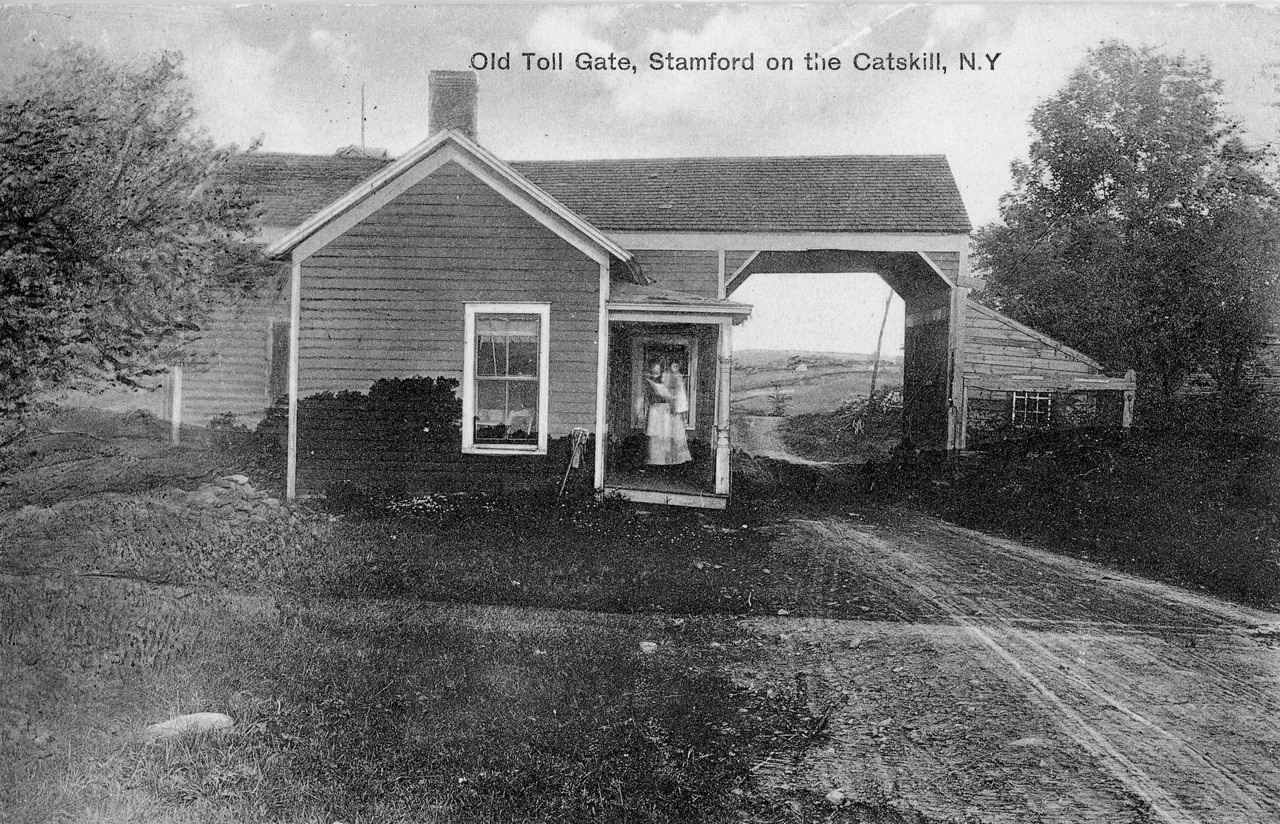 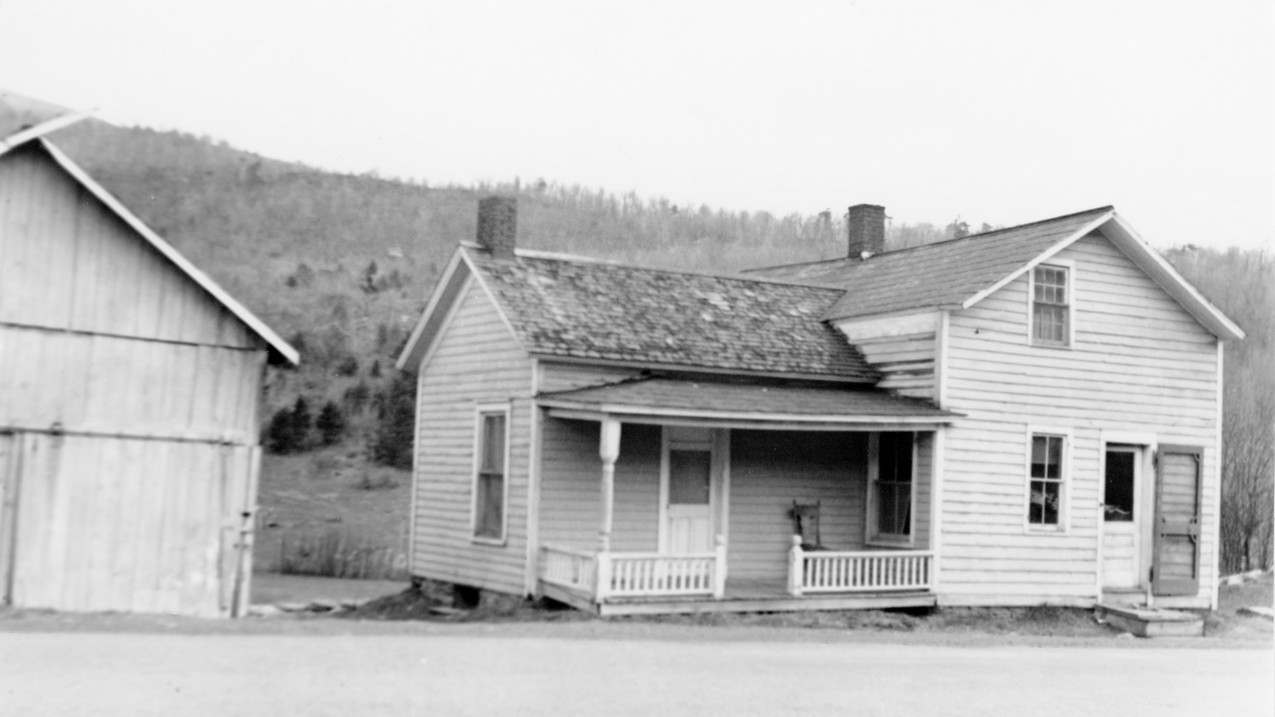 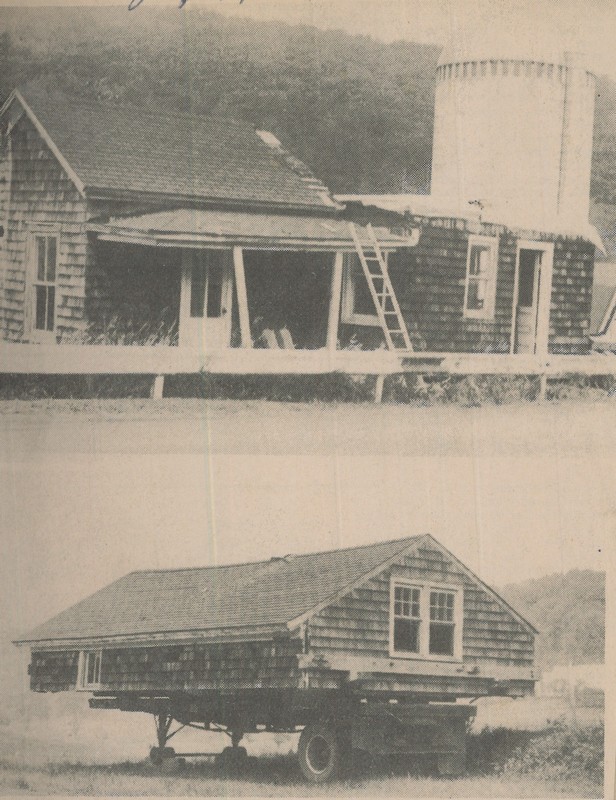 The Husted Hollow School, built in the 1870s once stood in the Town of Kortright, School District 10, and served the community until 1934. This one-room schoolhouse was donated by Mr. James Davis & Mr. Robert McDowell. 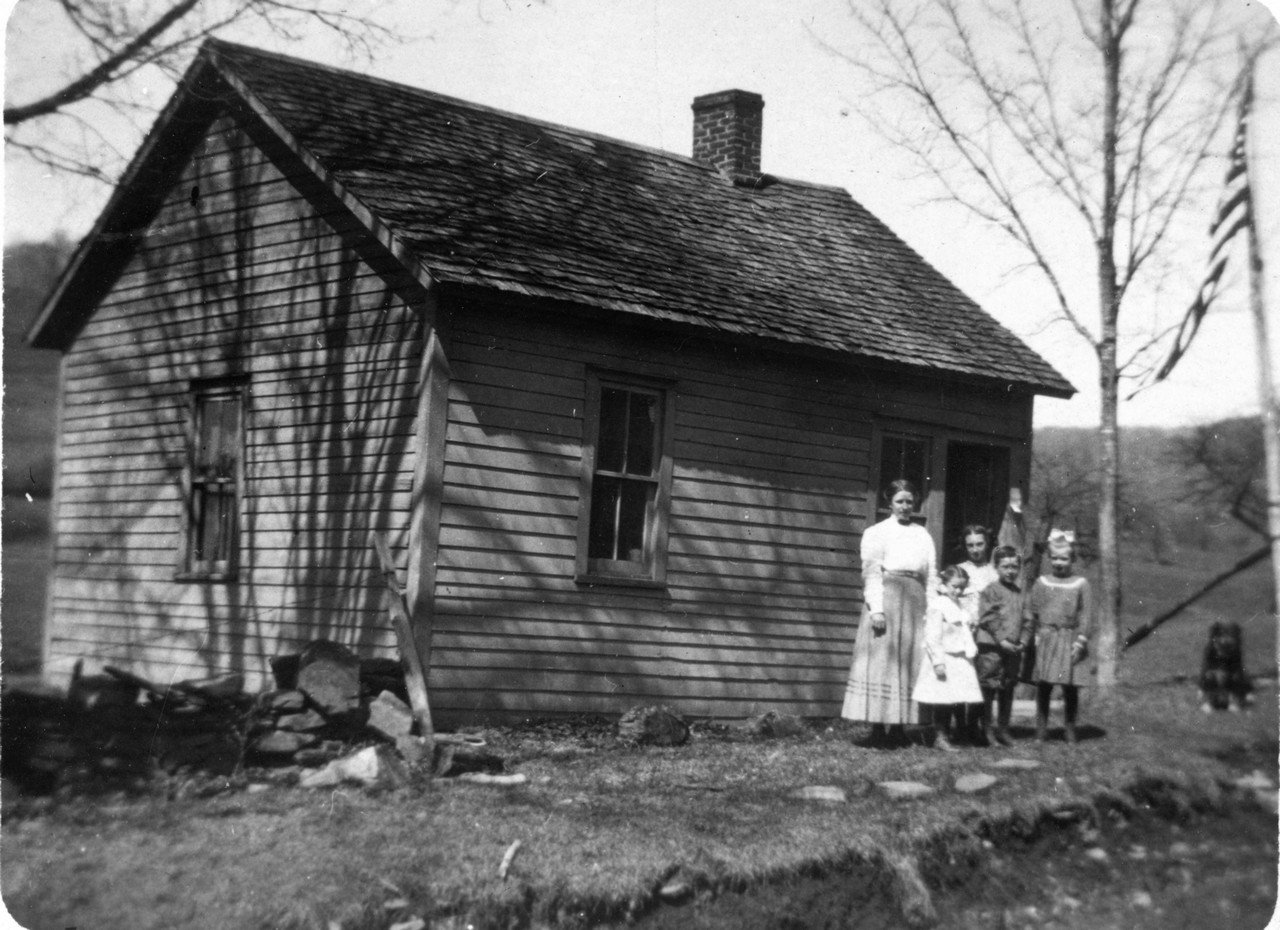 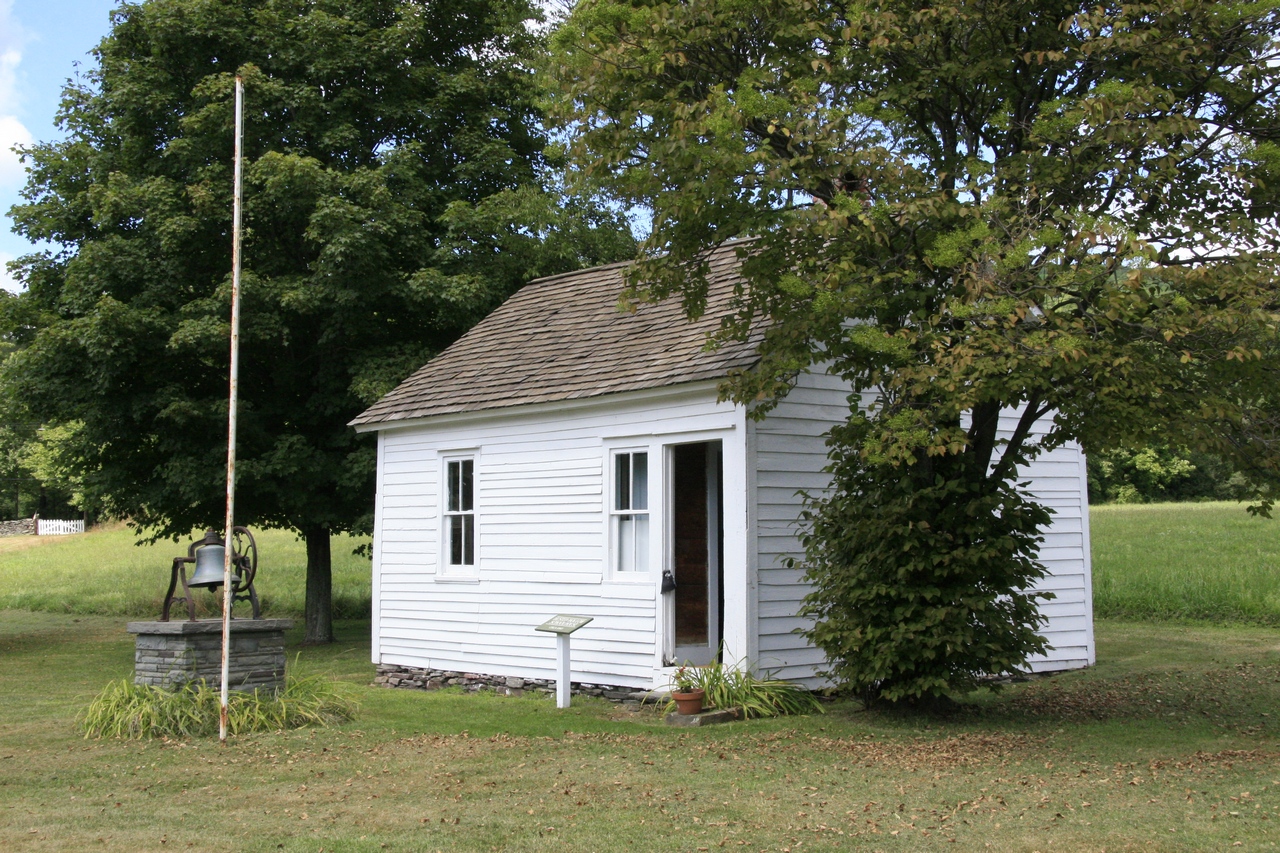 The Woodin Blacksmith Shop and Corn Crib from the Woodin farm in Wolf Hollow, Andes was moved to the site along with a corncrib in 1993. This late 19th century building served as a blacksmith and repair shop for three generations of the Woodin family. It was donated by the Woodin Family. 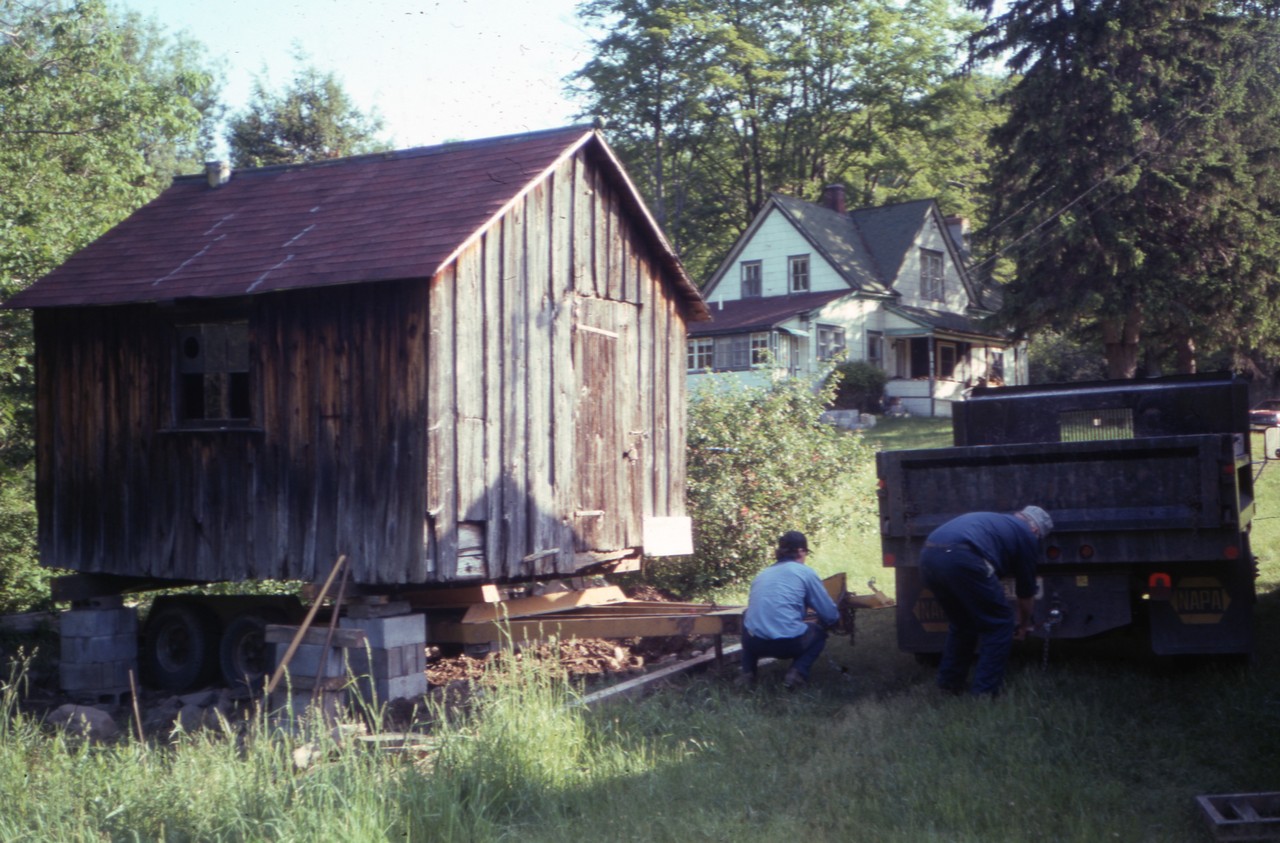 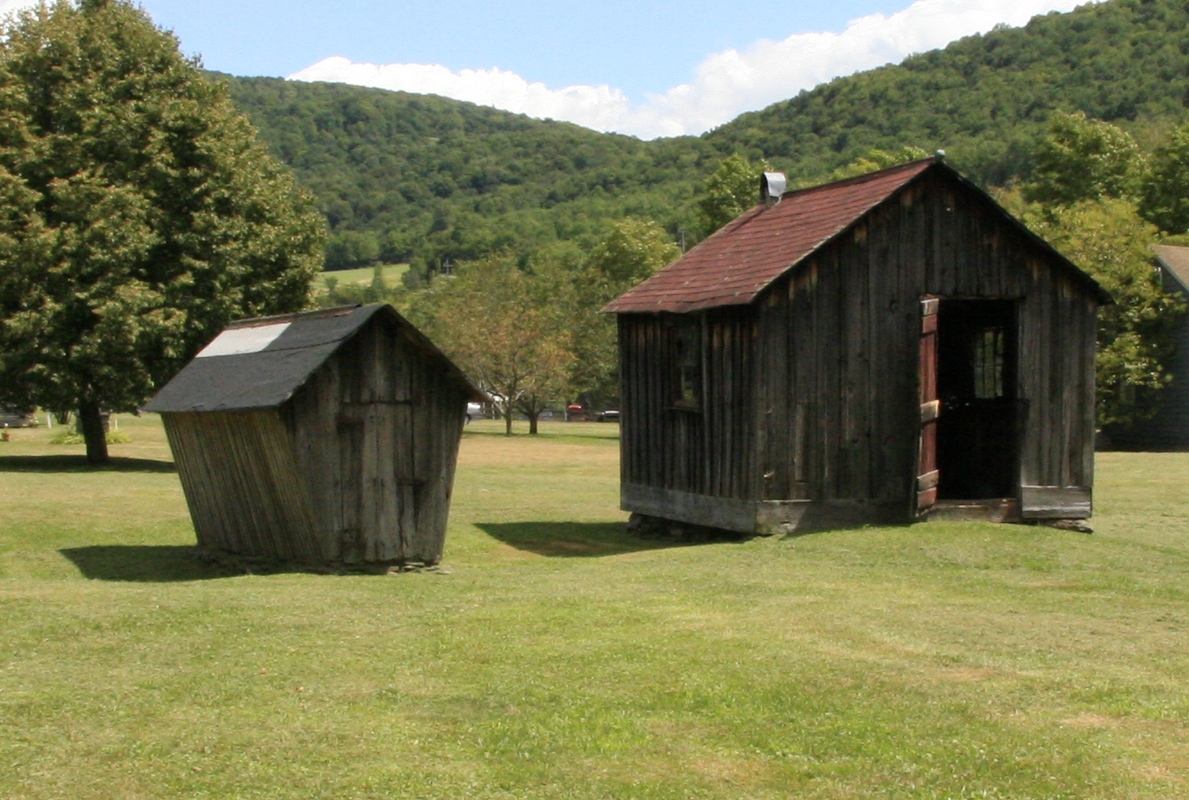 The Christian Church at Fitch's bridge still stands on its original location just half a mile north of DCHA and immediately adjacent to the Fitch's Covered Bridge. The church sits on land leased by Gideon Frisbee in 1822 for construction of a "Christian" church. The church was last altered in 1859. In 1990 the church was donated to the Delaware County Historical Association by the Christian Science Society. 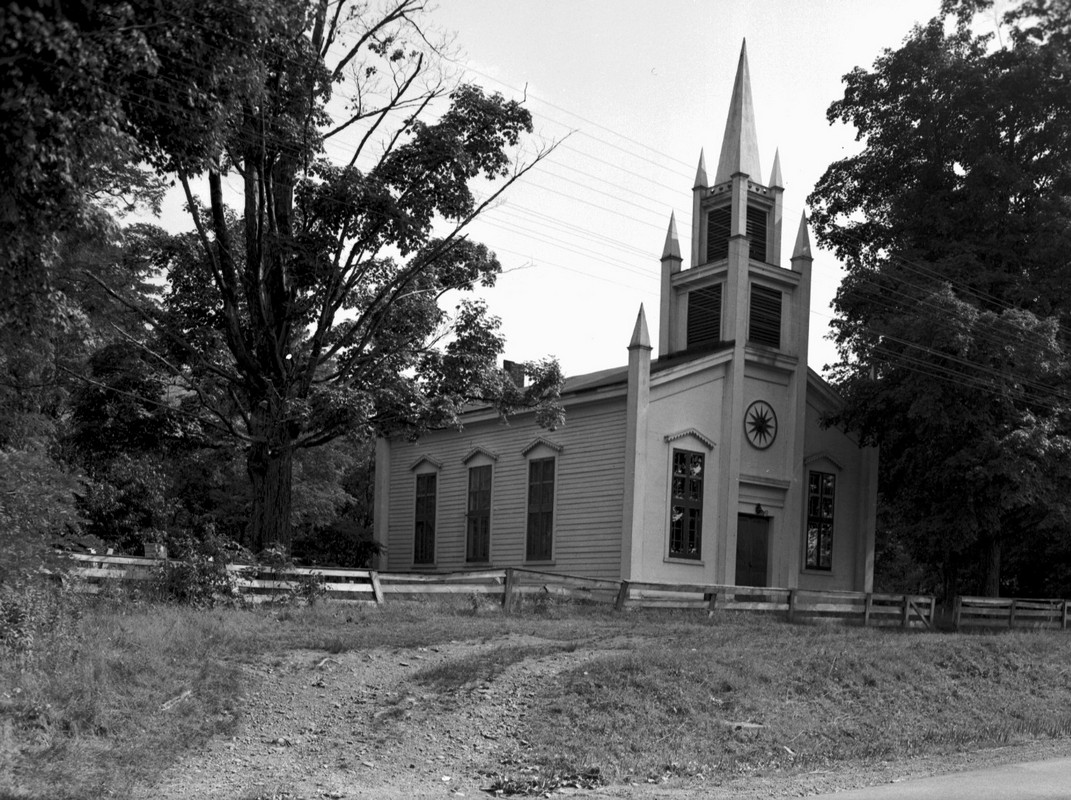 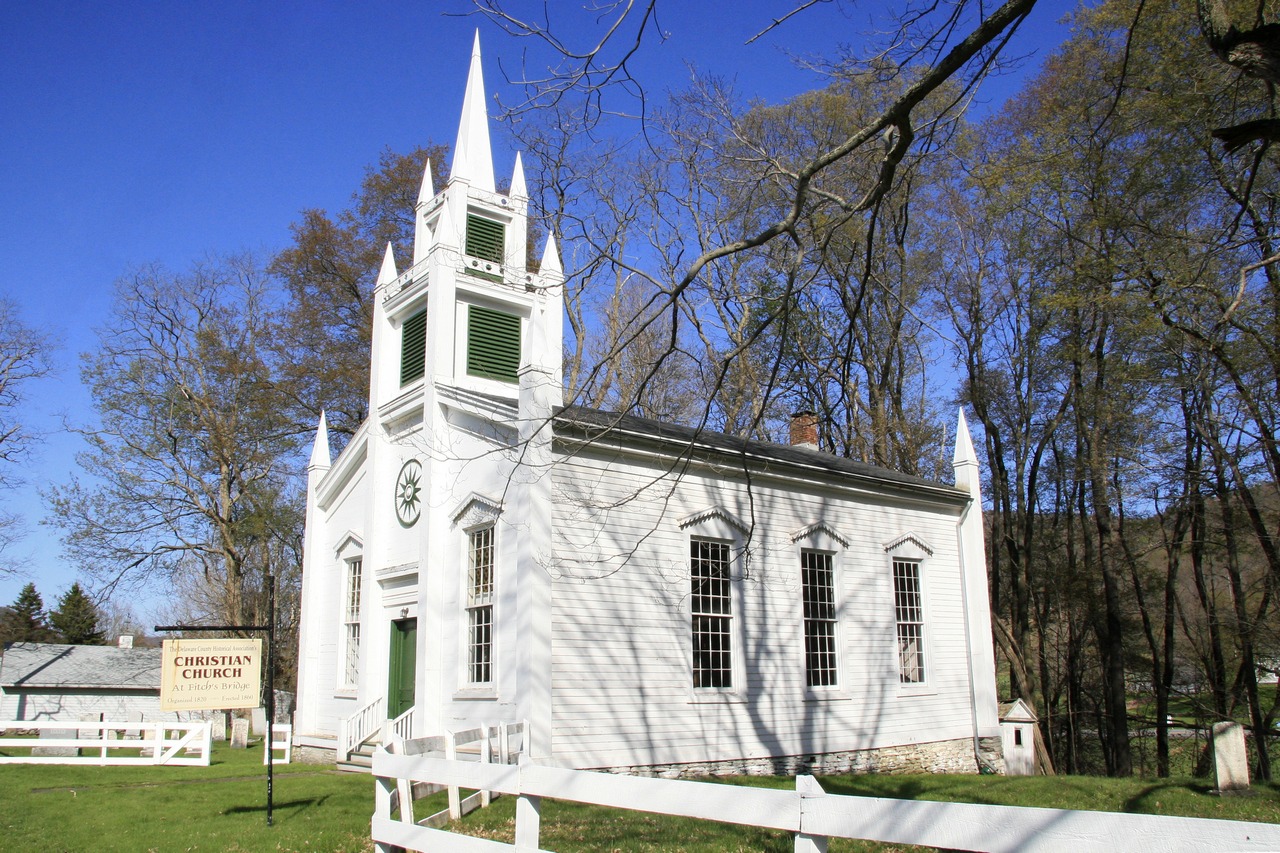 The Delaware County Historical Association published its first book in 1949 entitled Chapters in the History of Delaware County New York, by John Monroe, DCHA's first president. DCHA has continued to produce books, informational booklets and newsletters. The following is a list of most of DCHA's books: 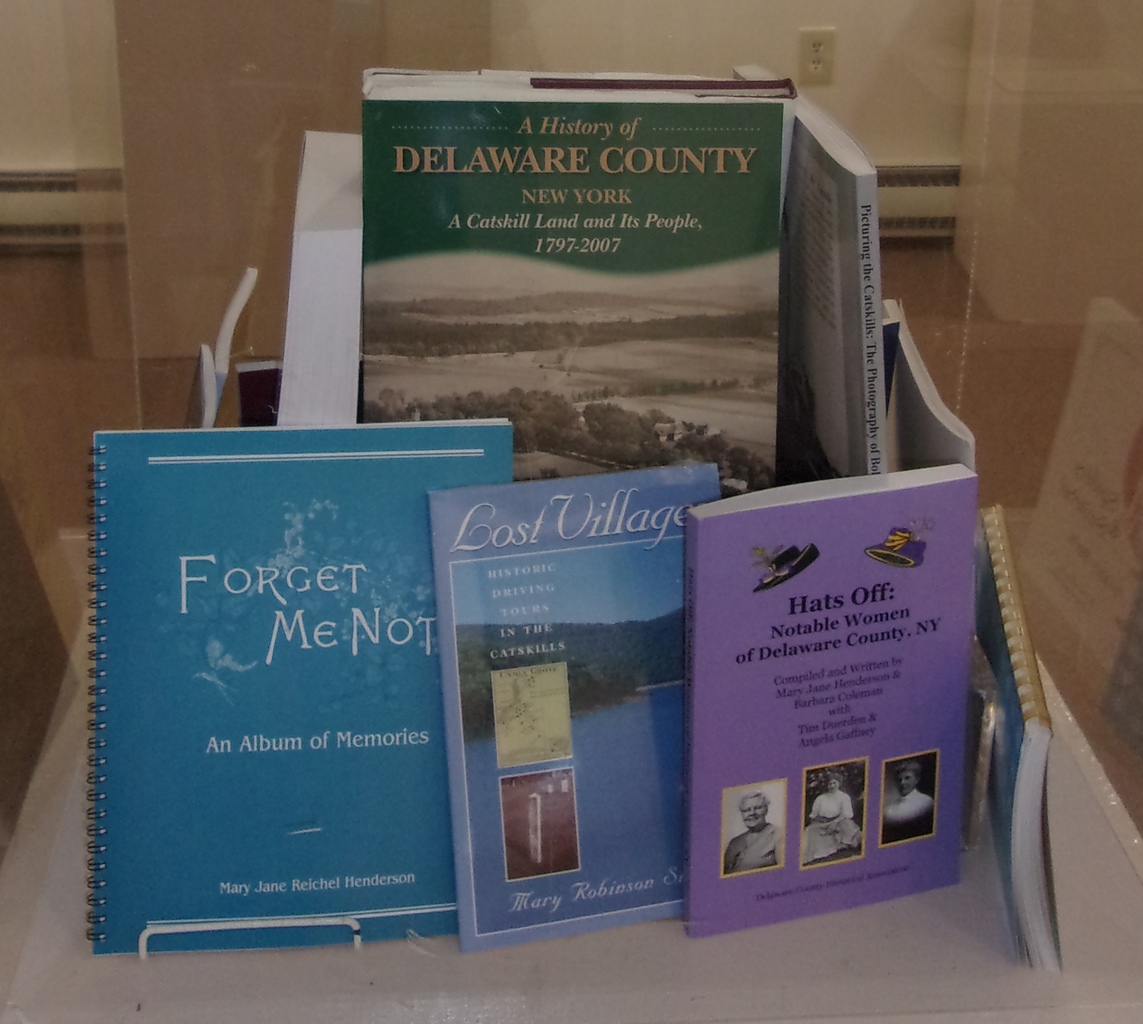 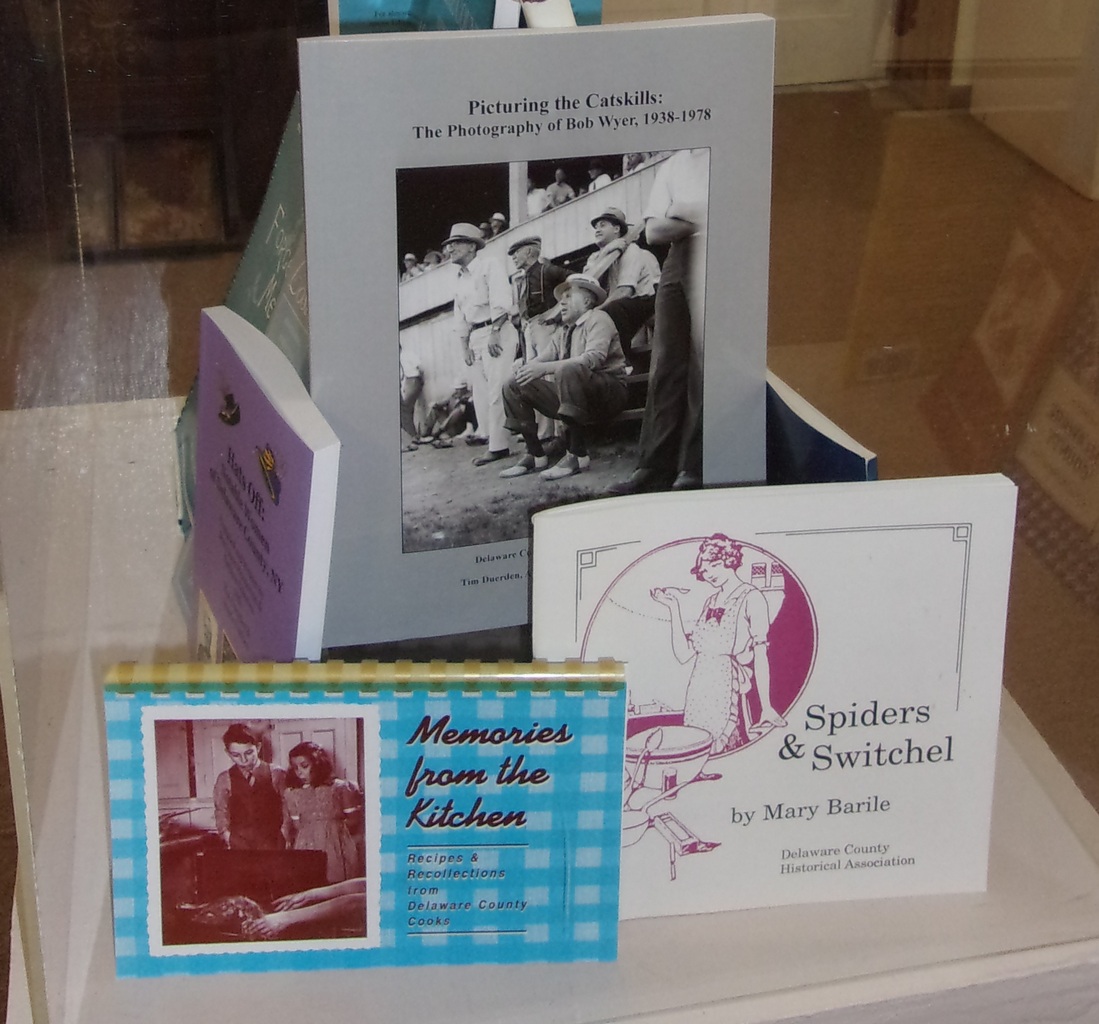 I conducted research and fieldwork for several exhibition projects, including Expressions of Faith (1987); Quilted Together: Women, Quilts and Communities (1989) with accompanying publication; Farm Work and Fair Play, (1990) with accompanying publication and video about the Delaware County Fair. I also developed and presented a program for 4th and 7th grade students in folk arts-in-education among other programs for the public. - Joyce Ice (Folklorist), January 13, 2020